Starting this Thursday, November 12, the largest Asian American film festival on the east coast comes back to Philly!  The Philadelphia Asian American Film Festival (PAAFF) offers the best in the arts from the Asian American community. With films, music, and discussion panels, you can immerse yourself in the continuing success of Asian American artists.

From documentaries to international shorts, PAAFF debuts films from rising and established filmmakers alike. The monumental documentary In Football We Trust delves into the complex and tightly knit Polynesian community in Salt Lake City. As one of the chief sources for the influx of Pacific Islanders in the NFL, In Football We Trust gives unprecedented access in to the lives of four young Polynesian men as the navigate through high school, striving to overcome gang violence and poverty to find success through the promise of football. Family Gathering, a witty short film by David Au about a recently married interracial gay couple, explores the layers of an endearing Asian American family as they spend an afternoon together that no one will forget.

The discussion panels will focus on the recent triumphs of Asian Americans and Pacific Islander Americans in major network television shows and the music industry. With success in shows such as Fresh off the Boat, The Walking Dead, Community, The Mindy Kaling Show, and Selfie, the APAs in Television panel looks to discuss the advent of Asian Americans on television. Panelists will include Peter Shinkoda, actor and star of Marvel’s Daredevil, and Denise Nakano, an NBC10 news anchor. Other panels will include Strength in NUMBERS, a panel discussing the current state of Asian American musicians in the hip-hop industry. Curated by Scott CHOPS Jung of Philly’s legendary Mountain brothers, a producer whose credits include Kanye West, Snoop Dogg, Lil Wayne and Nicki Minaj, panelists will be Chris PERIl-L Wang and Steve STYLES INFINITE Wei, both of Mountain Brothers, and Catzie Veilayphonh, a spoken word artist. After the discussion, a concert with performances by Danny Chung, formerly known as Decipher, Ann One, JL Jupiter, and Joanlee will be held.

Head over to www.phillyasianfilmfest.com for more information on all of the exciting events they have planned. 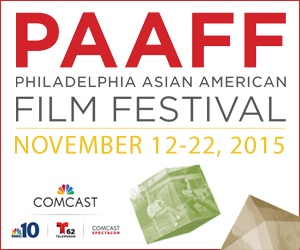