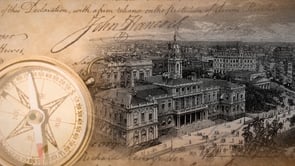 Did you catch the ‘Hamilton’s America’ documentary premiere on PBS last month?
Check out the teaser we filmed that aired before the documentary on BNY Mellon’s involvement with the film and how Alexander Hamilton founded the Bank of New York, known today as BNY Mellon.

Alexander Hamilton created the foundation of our United States financial system by founding one of the very first banks of the United States, BNY Mellon. One of Broadway’s most popular tickets in town, “Hamilton: The Musical” has highlighted and popularized this story and our client BNY Mellon has sponsored a documentary called “Hamiltons America” which aired on WHYY and PBS this October.

We filmed Gerald Hassell, the CEO of BNY Mellon flipping through the very first bank ledger of the Bank of New York in 1783 — one of the first banks in the United States and founded by Alexander Hamilton. It was really awesome learning about the early history of BNY Mellon and getting to see close and personal, the signatures of John Jay, Henry Knox, John Adams, John Jacob Astor, just to name a few.